This blog is inspired by John Seymour, also known as John the Math Guy (http://johnthemathguy.com/).

Last year in 2016, John wrote a blog about his burning bush, the euonymus alaus, and the fact that it was starting chromatic transmogrification in September ( http://johnthemathguy.blogspot.com/2016/09/the-color-of-leaves.html). In his article, he picked several leaves and plotted the CIE a* & b* graph, as well as a spectral curve for each.

Due to the fact that maple trees are quite common in this area, I decided to study the colorimetric representation of two kinds, acer rubrum (aka. red maple: https://en.wikipedia.org/wiki/Acer_rubrum) and acer platanoides (aka. norway maple: https://en.wikipedia.org/wiki/Acer_platanoides). Please note that all leaves referenced below were gathered during the same time period in October, 2017.   Therefore, the color of each leaf is just a snapshot of that specific time and location. At the end of this article, the color gamut of all leaves sampled for this article will be displayed in 3D CIE L*a*b* color space for visual entertainment. 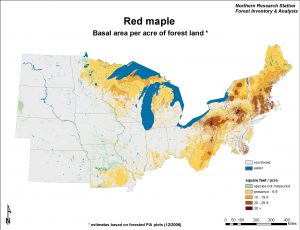 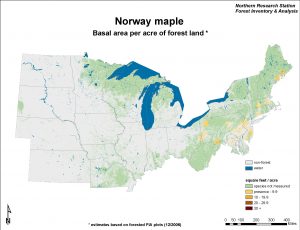 Introduction
Fall foliage is widely adored by many in the Northeast region of the United States. It is not uncommon to encounter families on a road trip or camping in national or state preservation areas during foliage season. The goal of this article is to review leaves with different levels of foliage in terms of spectral reflectance data, which is similar to how our human eyes see color. Leaves changing color due to chlorosis, stress or other factors are not discussed in this article.

The color development of fall maple foliage is well known with three major pigments: chlorophyll, carotenoid, and anthocyanin pigments. Chlorophyll is the substance that makes leaves appear green in the early spring through late summer (Kozlowski and Pallardy). When the lower temperatures and shorter days begin, the carotenoid, contained in the leaves during the entire growing season starts to reveal itself to help chlorophyll in light absorption for photosynthesis (Dey and Harbourne). For plants with anthocyanin, this pigment is responsible for the red-pink display of the maple leaves in the fall.

Methodology
Each leaf was pressed in between two pieces of paper and pressed down by book weights for a couple days to ensure a flat, smooth measurement area. During measurement, each leaf was backed by a neutral ceramic white tile and 3 readings were averaged for a final output. Since there is no special effect from the leaves, such as metal flakes or exotic coatings, I utilized a 0/45 geometry spectrophotometer, the Techkon SpectroDens 4, as the main color capture instrument. Data was imported and analyzed by MatchMyColor Colibri software. 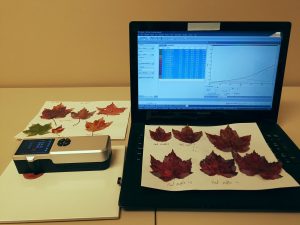 Result and Discussion
From the spectral curve figures below, green leaves have a bump of approximately 550 nm area with suppressed blue region and red region. The chlorophyll absorbs most of the blue and red wavelength light and reflects the green component. The figure below shows the relative absorbance of the chlorophyll pigment (courtesy to Harvard Forest) and the spectral graph of greenish red maple leaves. 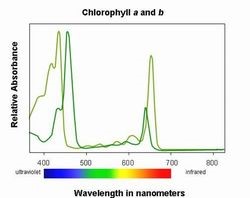 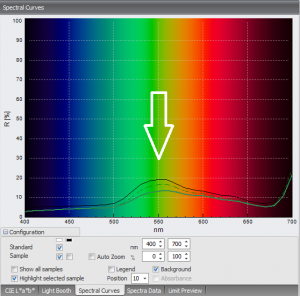 With the development of anthocyanin pigment, most of the blue, green and partially yellow wavelength light are absorbed but reflecting almost the entire red color spectrum. Depending on the degree of foliage, various shades of red colors dominate the appearance of leaves. Below are the relative absorbance (courtesy to Harvard Forest) of anthocyanin pigment and the spectral graph of reddish red maple leaves. 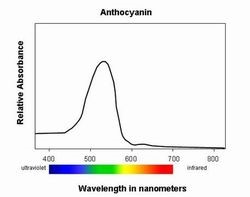 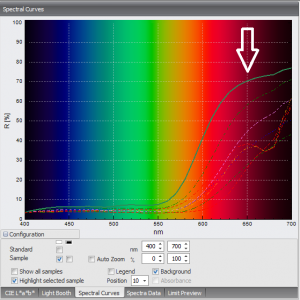 When the leaves start to lose chlorophyll and carotenoid reveals itself to aid in the  photosynthesis process, leaves begin to have a higher reflection on the light wavelength in the green and yellow visible spectrum and the lower red counterpart, and continue absorbing blue light in the spectrum. In other words, the leaves start to turn yellow as the last color in their life cycle. Below are the relative absorbance (courtesy of Harvard Forest) and the spectral graph of yellowish red maple leaves. 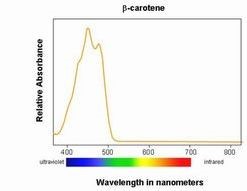 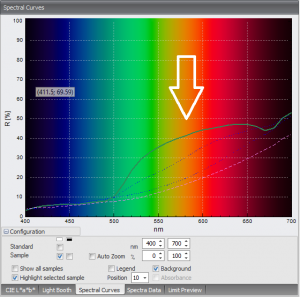 Here are the spectral curves for all red maple samples discussed in the paragraphs above. 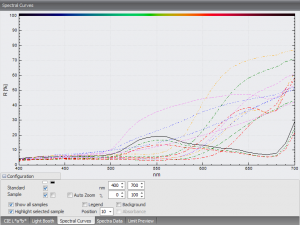 Since the color development behavior of the norway maple is quite similar to red maple, redundant analysis is omitted here. Below are the spectral curves for all norway samples I gathered for this article. 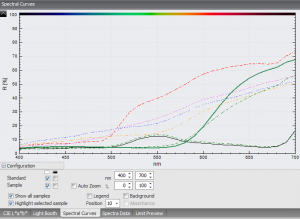 Thanks to the 3D gamut view in the Colibri software, I imported all measurements for this article and sorted them by tree kind, which mapped the color gamut for samples from two kinds of maple trees and also serves as eye candy for all of the color/forest enthusiasts out there! 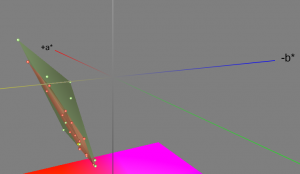