Print Quality Management
Are You Ready to “Make the Switch”? We Make it Easy 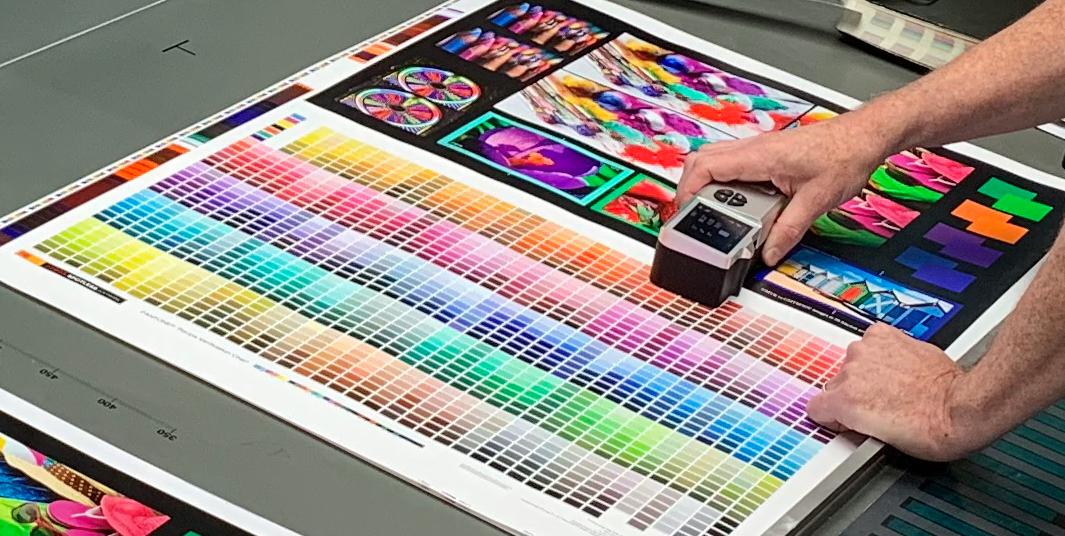 Should I Use a Densitometer or Spectrophotometer in My Pressroom – this a question we hear all the time from printers across all segments of the industry. While the densitometer has been around for many years and has been widely adopted, there is no doubt that the momentum has now shifted towards using spectrophotometers in the pressroom. Today’s pressroom spectrophotometers (sometimes called “spectro-densitometers”), offer all of the capabilities of a densitometer and also have the ability to actually measure color and numeric color differences according to how the human visual system see and interprets color. I should also point out that the price of pressroom spectrophotometers has fallen over the years making them more accessible than ever for printers of all sizes. So let’s take a closer look at the capabilities of each instrument type to see why the shift is on.

Densitometers
The first thing we need to consider is that densitometers do not measure color. That’s right. They do not measure color! Instead, they measure the density of a printed sample which is only a measure of the absorbance of an ink at specific wavelengths of light. For example, yellow ink has a maximum absorbance in the blue region, therefore, its density is calculated using a blue filter. For CMYK inks, the corresponding filters inside a densitometer are red, green, blue and “visual” respectively, where the visual filter has a response that is slightly wider than the green filter. This measurement of reflected light is called “remission” where a value of 1.0 is perfectly reflective and value of 0.0 is a perfect absorber. From here, we use the formula below to calculate “density”:

Following the formula above, a paper that has a remission of 0.85, would yield a density of 0.07 while a saturated ink with a remission of 0.1 would yield a density of 1.0. Density is useful because it corresponds closely with the relative ink film thickness of most printing inks. While most printers would agree that it is very difficult to see the difference between yellow ink at a density of 0.8 and a density of 1.0, this is an easy task for the densitometer which replaces human subjectivity with an objective measure of the ink film thickness. For this reason, the densitometer quickly surpassed the capabilities of even the best trained eye for monitoring ink film thickness on a printed sheet. Establishing and maintaining correct solid ink densities is critical for color accuracy and repeatability as color separations are made based on a specific set of solid ink film densities.

Beyond density, additional print metrics can also be calculated on densitometers using standardized equations to achieve the following:

While Density is useful for controlling the solids, TV or TVI monitors the halftones while Print Contrast will keep an eye on your shadow areas. Those metrics monitor tone reproduction quality which can change due to various print conditions. Trapping evaluates an inks ability to accept another ink printed on top of it, such as a 2-color overprint, as compared to printing that ink on a dry substrate. Finally, Slur and Doubling can detect defects in imaging where dots are stretched in one dimension or repeated due to a phenomenon of contamination of the blanket from previous impression.

So in our previous discussion regarding the capabilities of densitometers, did we ever say that a densitometer has the capability to measure a color? While the answer is no, we did learn that densitometers are very effective process control tools for establishing and maintaining important print characteristics like solid ink density and TVI. Although, also keep in mind that because densitometers use filters that were designed for use with CMYK inks, they are not as effective when measuring spot color inks and expanded gamut ink sets which go beyond CMYK colors.

Spectrophotometers
So now let’s talk about spectrophotometers and how they differ from densitometers. We already learned densitometers only uses Red, Green, and Blue filters to quantify light absorption of CMYK inks which is directly related to the ink film thickness or ink density. However, to determine if 2 colors match each other or to quantify the color difference between 2 colors, a spectrophotometer will be required. The modern spectrophotometer for print environments is a cost effective, fast, and useful measurement instrument for capturing discreet spectrum amplitude values typically at 10 nm or 20 nm intervals. As in the case of the densitometer, a stable white light source perpendicular to the printed sample is used for illumination. The main difference is that in the optical path, the reflected light is separated with either a diffraction grating or by very narrow band filters into spectral samples spaced 10 nm to 20 nm apart. The resultant spectral reflectance curve is an excellent identifier of a color sample somewhat analogous to how fingerprints can be used to identify individuals. With such spectral fingerprints, it is then possible to convert this data into either the industry standard CIE Lab or LCh color space which are both designed to model how human beings see and experience color. These 3-coordinate color models have their roots in early work done by Alfred Munsell and others that attempted to organize the color that they saw in nature and they allow us to objectively quantify and communicate the visualization or human experience of color.

To sum it up, densitometers are a relatively inexpensive process control devices that are great for monitoring density, TVI, and important print attributes. However, densitometers do not measure color or color differences, and they have problems with inks beyond process CMYK’s. Costing somewhat more, spectrophotometers can do everything densitometers can do, but with the added benefits of also measuring color, color difference, working beyond only CMYK process colors, and other features not covered in this blog such as G7 conformance, whiteness, opacity, and more. If you still have specific questions about the differences between densitometers and spectrophotometers or which one is right for your needs, please feel free to call us and we’re happy to discuss.