Have You Fallen Behind on Your Device Recertifications?
Color QC In The Inkroom

When printing colors other than CMYK, many users understandably turn to colorimetric information (CIE LAB, Delta-E). Frequently overlooked, however, is the importance of using optimized density metrics for process control in the offset lithographic pressroom.  One such metric, available on many spectrodensitometers, is spectral density (sometimes called “density-by-wavelength” or “lambda density”).

A brief illustration of how a densitometer “sees” color ensues, followed by an overview of spectral density.

Consider looking at a printed cyan ink film through a red filter, you would notice that the cyan appears near-black: this is a representative example of the way that the densitometer ‘sees’ the color. Changes in cyan ink film thickness are especially sensitive when using red as the complementary filter ‘channel’ (also known as ‘filter response’ or simply ‘response’). Traditional densitometers included blue and green filters, as well, the purpose of which is to have three channels optimized for CMY printing. 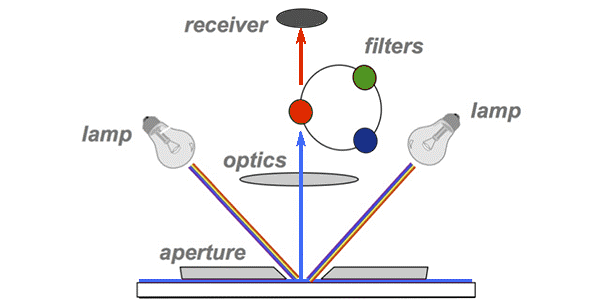 Returning the aforementioned red filter illustration, using that particular channel to measure yellow and magenta ink films would result in a ‘gray’ appearance (less close to black than the cyan ink film); hence a lower density number results. In short, the traditional densitometer is designed to measure process color inks, and for cyan, magenta and yellow ink films the optimal filter response with which to monitor ink film thickness is contained respectively in the red, green and blue ‘channels.’

When spot colors are measured with a traditional densitometer, the instrument will attempt to select the ‘channel’ that yields the best of the three chromatic channels to monitor that particular color. For example, a green spot color may be measured by as a cyan (by the red filter response) or it may be measured by the as a yellow (by the blue filter response). The response selected depends on the shade of the green; “blue” shade greens are more likely to be read as ‘cyan’ and “yellow” shade greens are more likely to be measured as ‘yellow’. Of course, none of these measurements are optimal; the instrument is essentially selecting a response optimized for cyan or yellow inks and using it to yield a density reading of the green spot color.

This situation can be especially confusing when a spot color is at the ‘cusp’ of the optimal filter response between two process colors. Imagine if the difference in the response through the cyan and yellow channels of the green spot color was within 0.02 density. In this instance it is likely that, when considering normal printing process control conditions, the densitometer would select the cyan response in some areas of the press sheet and the yellow response in other areas of the press sheet. This could contribute to confusion in process control situations.

Some densitometers give the user the ability to ‘lock’ the densitometer into a single filter response or to display all of the responses simultaneously, and although this gives the user the ability to look at a single response when measuring such colors such workarounds are often cumbersome to use. It is also important to remember that traditional Status density was not designed as an optimized way to measure density of a spot color.

With the advent of the spectrodensitometer, a better way to measure the density of spot colors is available; this is commonly known as ‘spectral’ density. Rather than force the densitometer to the nearest cyan, magenta or yellow response, using the spectral information a measuring response optimized for that particular color is automatically selected. This ensures subsequent density readings of that color are optimized for monitoring the ink film thickness for process control applications. 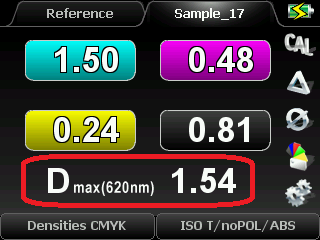 Color reflection density, as a relative reading for ink film thickness, is widely recognized as the best way to monitor process control on an offset lithographic printing press. Press professionals are often limited to adjusting ink keys or “sweep” to adjust ink film thickness and the resultant color. It therefore makes sense to optimize the density metric used for this purpose. Using spectral density for spot colors not only takes advantage of the capabilities of a spectrodensitometer, but also likely offers the best available metric for process control applications when printing non-process colors.

This blog was written by: ©Bruce Leigh Myers, Ph.D.