A previous blog post (“Consistent Color Measurement”) discussed instrument settings and procedures to ensure consistent color measurement throughout the supply chain. Once these are all in place, how well will instruments agree?

All spectrophotometer manufacturers quote “repeatability” as one of their specs. This is the degree to which an instrument agrees with itself when making measurements of the same spot on the same sample, over a short period of time. Instrument repeatability is a small number, often less than 0.1 ΔE*ab. This number is misleading, since it is by far not the limiting factor. And it sets up an expectation that different instruments should agree this closely.

There have been a number of studies by researchers where different instruments have been compared. John Seymour presented a paper at TAGA 2013 where he summarized the results of seven studies. Quoting from his paper:

It’s difficult to distill these studies down to a single number, but it is fair to say that 1.0 ΔE*ab is a reasonable estimate for average disagreement, and that seeing disagreement greater than 2.0 ΔE*ab is not uncommon.

Our Own Tests With 4 Instrument Models

To see where things stand in field use, we measured a range of printed colors. Both spot and process colors were included. Each color was measured using four spectrophotometers:

All instruments were within the certification from their manufacturer. The three X-Rite instruments are all XRGA certified. The fourth instrument is a Techkon SpectroDens. In each case, the print was measured at approximately the same spot.

The goal was to try and answer the following questions: 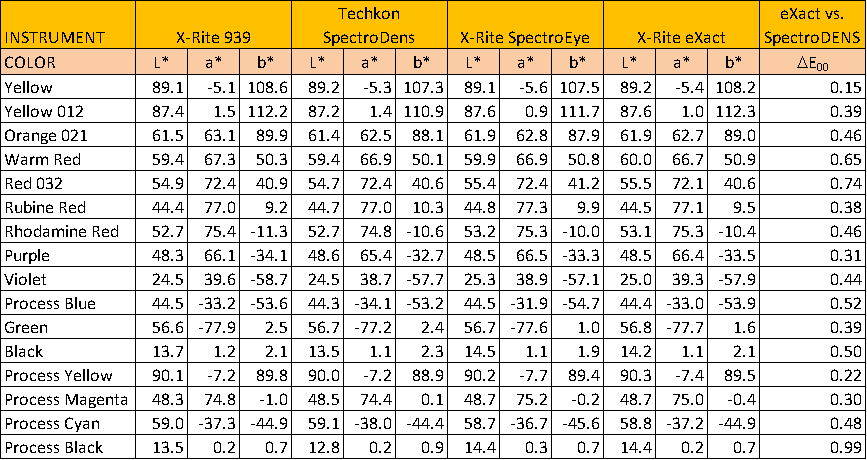 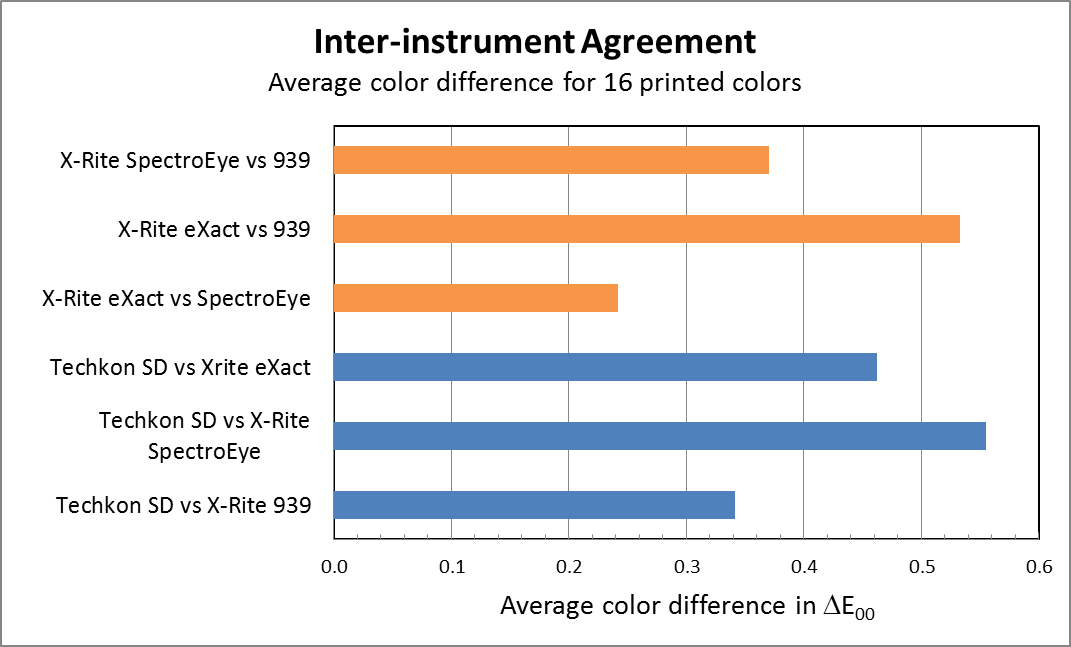 We reduced the measurement data to color differences in ΔE00 between 6 different pairs of instruments. Three of these pairs were between Techkon SpectroDENS and X-Rite models. The other three pairs were between the X-Rite models themselves. In this exercise, average color differences in ΔE00 ranging from 0.24 to 0.55 were found when considering all 16 colors. The maximum color difference in ΔE00 for any color between any pair of instruments was 1.06. This represents what can be expected in commercial practice for certified and well-maintained instruments. The variation between instruments is within expected tolerance for printing of brand colors (color difference in ΔE00 of 2.0 to 3.0). It is worthwhile to note that the Techkon SpectroDENS agrees with the X-Rite units almost as well as the X-Rite instruments agree amongst themselves.

What about M1?
All previous measurements were under M0 mode, and on samples with little or no fluorescence. What about M1 measurements on fluorescent samples? Dave Wyble et al. measured fluorescent reference tiles with seven M1 instruments from three instrument manufacturers, including Techkon. These reference tiles were also measured by the Canadian national standards lab, NRC. The results showed a broader dispersion among the eight instruments in M1 mode for the most highly fluorescent samples than we would see in M0 measurement condition. This paper titled “”Investigation of the Implementation Aspects of the M1 Condition” was presented at 2015 TAGA by Wyble and Seymour and will be published soon. We hope to further explore the topic of inter-instrument agreement in the presence of fluorescence and UV light in a separate post.

What is XRGA?
When X-Rite joined with GretagMacbeth in 2006, they had to deal with a unique problem. They now needed to harmonize the measurements from instruments that had been designed and manufactured by different companies on different continents. The acronym “XRGA” was coined to brand this effort of reconciling measurements to a newly adopted common reference point. It is not a universal standard, but an internal reference point used by X-Rite to calibrate different instrument models in adherence to standards (ISO 13655, in particular). Other instruments developed according to ISO standards that are calibrated according to best practice manufacturing processes can be expected to agree with each other as well as XRGA instruments. More about XRGA here.